by Jassisays on April 23, 2015
Disclaimer: You all know that I am new to blogging (just born about 6 months back) and have written about a few weird topics and not been very regular with my writing (last post was in Feb) but there is one topic which compelled me to sit down and write because it needs attention. Attention not just because of the final output that you see but because of the thought, hard work and flawless execution that goes behind putting it together.
You guessed it (there is nothing to guess, its the topic of this post, you thought you were smart, hehe), its The P e r o press kit.
Remember its “The” P e r o press kit and not just another press kit and I will tell you why.
OK, I am sure most of you would not have attended the #AIFW2015 (not many people are privileged to attend one as the seats are limited and the flaunt value is very high so a lot of politics goes behind who would be invited and who would not be). Those who did attend, please share selfies that you clicked. For the uninitiated, a press kit is a summary of the designer’s thought and presented as per designer’s wish.
So why is this particular press kit special (this comment is not season specific, all seasons that #pero has showcased, the press kits have been special), here I am going to highlight the #presskit put together for the #AmazonAutumnWinter2015 (I know using #hashtags increases reach of ones article, I am new to blogging but am smart).
The theme for the collection put together by the talented designer #AneethArora was uniforms and the best place to draw inspiration from was the military.
Wait: have you seen the press kit we are taking about, here take a look at this picture.

This one is a teaser. More good stuff to follow.
It started with a lot of thinking. There was a layered thought behind the theme and how to show case it and then came the big word or phrase “Alter Ego”. The thought being, when one is wearing a uniform, she/he is not themselves but an alter ego and hence one behaves, acts and showcases oneself differently. To bring alive the thought of Alter ego, Aneeth decided to collaborate with #princesspea, an artist whose alter ego is a princess which wears a pea shaped head whenever she is in public. Now the task was to bring the uniforms/ military theme to life. One of course was through the beautiful collection that she put up for the show, but the equally important was The press kit.
P e r o team researched online, read books and then we looked around and made a list of some items that the team would need to put together for the press kit.
Then the team met some army professionals, a retired Brigadier, a Colonel, and fathers of some friends through indepth interviews.
Research showcased that when it comes to armed forces, every soldier has a small box/ bag which is very personal and very dear to them and it has all the things that they need and they love.
So the hunt for the perfect box started. Took a few trips to loha mandi, metal market near chawri bazar, sadar, kinari etc but no luck. Finally the team came across an old gentleman, Mr Rehman (name changed) in sadar who agreed to do it for us. Advance was paid for two samples with a promise to show the sample in two days.
Two days later, the shop was locked and Mr Rehman has happily left for his village and would return only after the fashion week. Back to ground zero, the team started again. This time the team looked outside Delhi and a box manufacturer was located in Rajasthan who specialized in making small metal money banks for kids.
This gentleman was thankfully enterprising and agreed to do the boxes at a very good rate and also deliver the same on time but he would not be able to paint it for us.
The team looked for a paint shop who would paint the right military green with the rustic look and delivered in time and at a good price. A small scooter repair shop in town agreed to do it. Now for the screen printing “The P e r o heart”. No body in that town was ready to do it so the team transported the finished boxes to Delhi where a small screen printing shop finished the job for us. (The job in Rajasthan required 2-3 calls a day for 21 days and 3 trips to ensure the job was done well).
Parallel to that activity, the team was looking for other contents of the kit.
1. Swiss knife
2. Dog tag
3. Compass
4. Pins (brooches)
5. Princess pea doll
6. Inland letters
7. Post cards
8. Fabric bandaids

1. Swiss knife: was sourced from China, etched with P e r o using laser embossing.
2. Dog tag: this was the hot item and the most sought after. This was made in pure brass, moulds were made for this in Baroda, metal cutting and chains were done in Ahmedabad and the intricate enamel work was done by some small town jewellers in Rajasthan. This process took two months.
3. Compass: was procured from China, etched with P e r o using lase embossing.
4. Pins (brooches): moulds were made in Ahmedabad, enamel work in Rajasthan, pins and polishing was again done in Ahmedabad.
5. Princess pea dolls: These are precious wooden dolls, handmade in Ettikopakka, takes painstakingly long to finish one doll. The team got 500 of them made for the press kits. Dresses for them were done using the current collection fabrics and stitched by skilled P e r o in house tailors.
6/7. Inland Letters/ Post cards: Who writes letters/ post cards these days, but when it comes to armed forces, they still long for a letter from home. Actual inland letters and post cards were bought and in the print shop replicas were made with the desired text.
8. Bandaids: another integral part of adventure and military life. This was an interesting way for sampling the fabric from the current season. 2500 band aids were bought, using adhesives, fabric swatches were pasted and every pieces was painstakingly cut to the right size and shape.
The journey from thought to final delivery took close to 3 months. That much time, thought and hard work goes into the P e r o press kit as it is an integral part of the shows that are put together and will continue to be.
A Royal Salute to the p e r o team. Have you got your P e r o press kit yet.

← 4 Names you can never spell correctly in the first attempt.
2 Minute Maggi Noodles: To eat or Not to eat? → 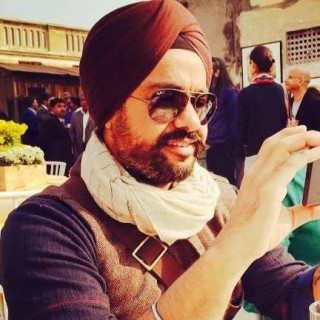 A corporate world dropout, marketer with experience in fmcg and banking with a digital bent of mind now venturing into fashion with interests in running, biking, food, travel, life, tech and it's sarcasm.